The Future of Mobility in BC

Picture yourself on a downtown Vancouver street circa 2050. Waves of bicycle commuters roll past as a new SkyTrain hums overhead. Buses and sleek electric vehicles line the lanes – some with no drivers at the wheel, and most bearing car-share branding. A family of four climbs into a sedan, curbside, for a ride they hailed with an app minutes earlier. Of all the vehicles sharing the road, not one emits a single milligram of greenhouse gas. 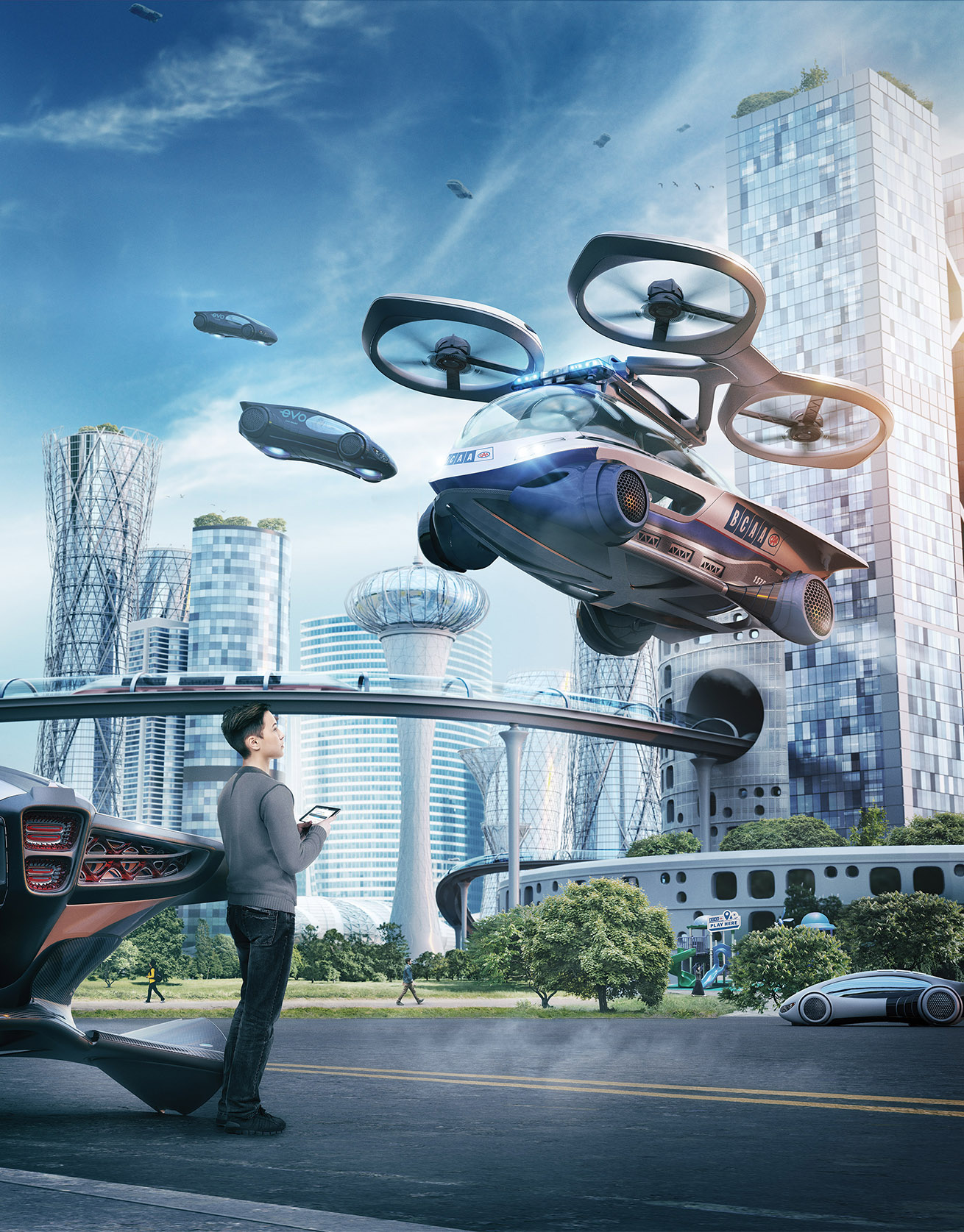 Though it sounds like a futuristic Jetsons fantasy, it’s a reality that’s not so distant. BC recently brought it one step closer with the Zero Emission Vehicle Act, setting an ambitious target of 2040 when all new light-duty car and truck sales will have to be zero-emission.

Ride-hailing is also upon us: Uber and Lyft are set to hit Metro Vancouver in late 2019, while Thunder Bay-based Uride has announced it will start operating in smaller BC markets such as Nanaimo, Victoria, Kelowna, Prince George and Kamloops. Car sharing has been in Vancouver for several years, offering a low-cost and convenient alternative to private-vehicle ownership. At the same time, public transit networks are expanding rapidly, and cycling is an increasingly viable commuting option in Vancouver, Victoria and other urban centres.

What’s more, autonomous, or driverless, vehicles – technology that not long ago seemed like science fiction – now exist and are being tested by the likes of Google, Uber and Tesla. Autonomous features such as automatic braking, active cruise control, blind-spot detection and self-parking already come standard on many modern vehicles.

“This is an exciting time. EVs, autonomous technology, car sharing and ride hailing are shaping consumer preferences,” says Grant Stockwell, Senior Vice President and Chief Mobility Officer for BCAA. “And not owning a vehicle is more possible today than it has ever been.”

That may be surprising coming from an organization launched more than 100 years ago to serve car owners. But for BCAA, change has been a constant. Gone are the days of cheap fuel and ubiquitous V8s, when individual car ownership was a necessity. “The landscape has changed. Convenience, affordability and climate-change policy are the big drivers,” says Stockwell.

This has prompted BCAA to adapt. In 2015, it took a big step when it launched Evo Car Share with a fleet of 250 Toyota Prius hybrids serving Greater Vancouver. Today the fleet includes 1,500 vehicles and there are more than 130,000 Members, who have made a collective 8.7 million trips. Experts estimate the average shared vehicle removes around nine private cars from the road, which means potentially 13,500 fewer vehicles are on the road thanks to Evo.

Auto clubs elsewhere in the world are evolving, too. In 2017, for example, the American Automobile Association launched Gig Car Share in the San Francisco Bay Area and Sacramento. And BCAA’s Western Australian counterpart, RAC, has been testing a driverless electric shuttle-bus service.

There are more changes coming for BCAA as well, says Stockwell. For instance: it’s planning to add mobile battery-charging units to its Roadside Assistance offerings. While EVs and hybrids only make up around two per cent of vehicles currently registered in BC, that number is likely to grow, and soon. The provincial government recently committed $50 million to ease EV sticker shock with subsidies, and promised to grow BC’s network of charging stations. But the real turning point is likely to be technological. In 2020, an unprecedented number of new EV models from nearly every major automaker is set to hit the market – sedans, hatchbacks, sports cars, roomy SUVs and even pickup trucks – along with longer-range batteries and more affordable prices.

In this brave new world of mobility, automobile associations are also keeping on top of autonomous technology, and its implications for safety and privacy. In a December 2018 survey, BCAA/CAA polled a nationwide sample of Members and found more than half of respondents were “very concerned” or “extremely concerned” about being a passenger in a driverless vehicle. Data privacy was another controversial issue for BCAA/CAA Members, since autonomous vehicles are highly connected and gather information on everything from addresses visited to routes travelled: 62 per cent of respondents said they “believed strongly” that drivers should be able to decide who gets to see vehicle data.

We have many legal and ethical issues to address before driverless cars hit Canadian roads en masse, says Canadian auto-industry consultant Dennis DesRosiers, founder of DesRosiers Automotive Consultants Inc. “For example, will the algorithms that control these vehicles prioritize occupant safety over pedestrian safety?” he says. “I doubt consumers will buy in unless they’re confident their safety is paramount.”

While this may be true, city planners worldwide see the writing on the wall and are working on ways to eventually integrate autonomous vehicles safely on public roads. The first step is reshaping city streets for people today, rather than letting technology shape the streets tomorrow, says Janette Sadik-Khan, chair of the National Association of City Transportation Officials (NACTO), an 81-city coalition that includes Vancouver.

“When the automotive age swept the nation a century ago, cities responded not by adapting cars and trucks to the varied uses of the street, but with a relentless clearcutting of obstacles from curb to curb,” she says. “As we anticipate the arrival of self-driving vehicles on city streets today, we have a historic opportunity to correct these mistakes.”

BCAA Members join Evo Car Share FREE, plus get 60 FREE minutes and save 10% on every trip. evo.ca/joinus

The Levels of Autonomous Driving 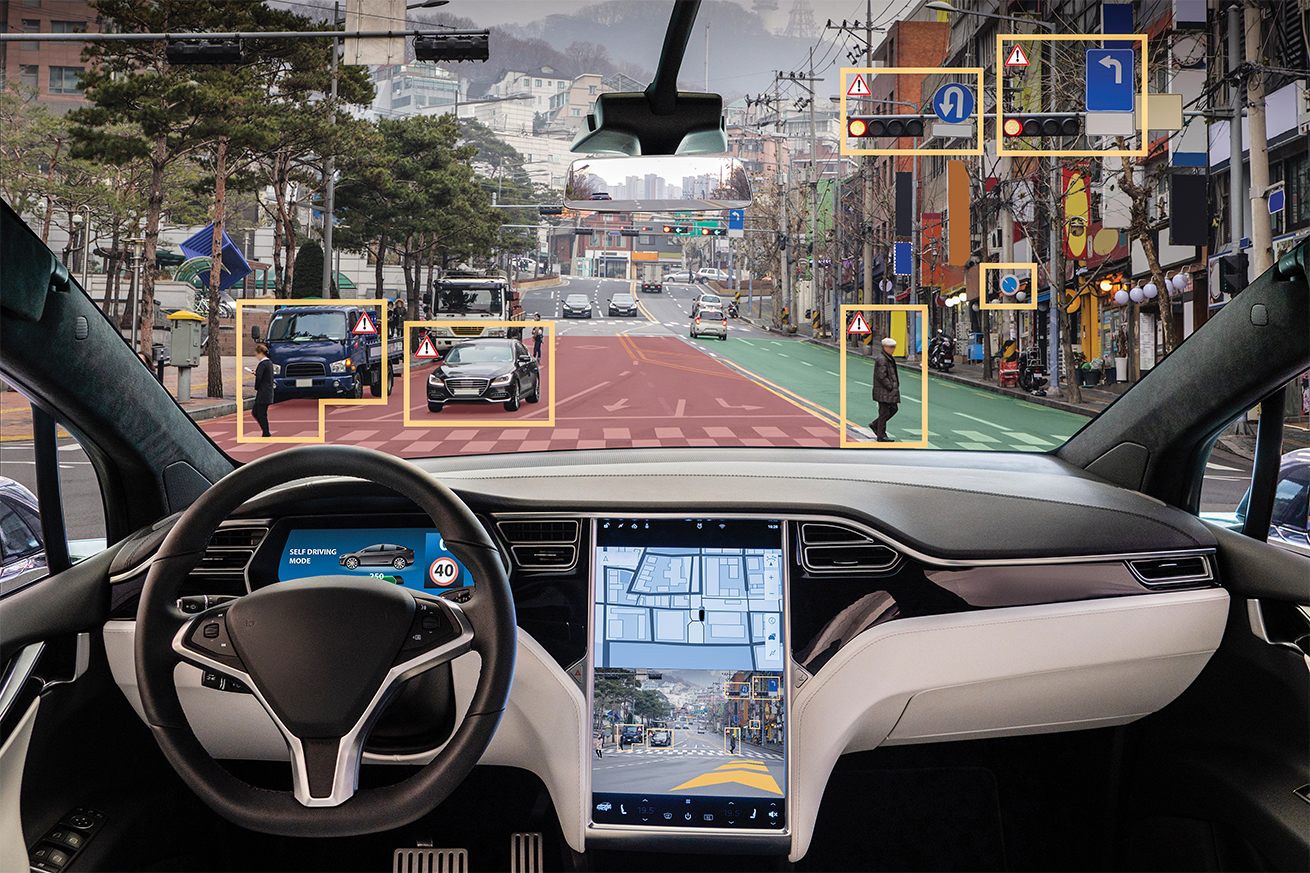 NACTO’s 2019 Blueprint for Autonomous Urbanism lays out a plan for how. Among other measures: prioritize transit, overhaul streets with pedestrians and cyclists in mind, lower speed limits, slim down roads and add plazas – causing vehicles, with and without drivers, to respect other road users by design.

Of course, it’s also important to remember that in the end, a driverless car is still a car. And private vehicles may not be the main way we get around in the future. City of Vancouver Manager of Transportation Planning Dale Bracewell foresees a transit-rich future, in which 90 per cent of city residents live within an easy walk or cycle of their daily needs – and autonomous technology plays a bigger role in mass transit than individual transportation.

Autonomous transit is nothing new in the Lower Mainland: the SkyTrain system has been driverless since its launch in 1985. Looking to 2050, Bracewell says, “I see new expressions of autonomous transit beyond SkyTrain being welcomed, helping move the majority of people in the safest and most cost-effective way. And heaps of road space have been allocated just for transit, autonomous or not. Walking is also our premier mode for getting to transit or our nearest shared electric vehicle.” The more single-occupancy vehicles we remove from city streets, he adds, the more real estate opens up for other uses, like protected bike lanes and green space.

In present-day Vancouver, one mobility phenomenon is taking private vehicles off roads faster than any other: car sharing. With four active services, including Evo Car Share, Vancouver has more shared vehicles per capita than any other North American city. The municipal government has long granted parking perks to car shares, with the goal of cutting congestion and greenhouse gas emissions. This July, it also made metered parking available (which Evo immediately made available free to its Members).

Take TransLink’s Transport 2050 survey to help shape the next 30 years of transportation in BC: transport2050.ca

It remains to be seen which new mobility options will emerge. Bracewell is currently looking at the feasibility of accommodating electric scooters, for instance, a “micro mobility” method already in use on city streets across the globe.

It’s a lot to tackle, and there is no playbook for navigating the ever-evolving world of mobility. “Often technology and consumers move faster than policy, so we need to adapt,” says Bracewell.

For BCAA, adapting is a matter of survival, and better serving its Members. Says Stockwell: “One thing I can state with certainty is that BCAA will be there, wherever the road leads.”

The Future of BC Car Insurance

Did you know ICBC has overhauled its car insurance rates? As of this fall, your years of driving experience, and your crash history, play a bigger role in determining what you pay for your ICBC Basic Autoplan premium. These are the major changes:

For a full list of ICBC’s changes, visit: icbc.com/change

ICBC’s Basic Autoplan is the mandatory coverage all BC vehicle owners must have. Optional coverage adds a layer of customized protection for yourself, your vehicle and your family, and is available from private insurers like BCAA. Members save 10%, plus can enjoy multi-vehicle, anti-theft and other discounts. bcaa.com/carinsurance