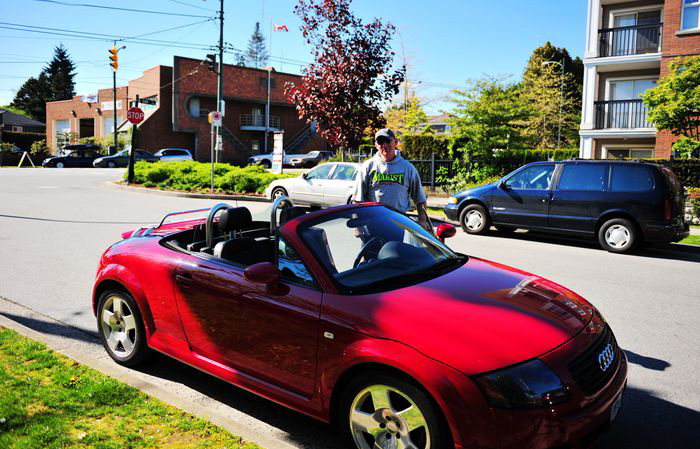 This #BCAASavestheDay story happened a few years ago. It is about two BCAA team members: (1) Bernie the BCAA service man who took my call and went out of his way to help me; and (2) the woman at the BCAA call center who showed such empathy and excellent customer service when I needed it. Here is how the story unfolded:

It was 3:00 on a cold winter morning and I was getting into a cab outside my condo and heading for the airport to fly to Kauai. It was very dark, and while I was struggling with my luggage, I inadvertently dropped my keys on the sidewalk. When I say keys, I mean car keys, house keys, work keys, all my keys. Luckily the keys were turned in to my locksmith - this story is full of nice people - and I was advised they had been found after a few stress-filled days. Big relief!

When I returned home two weeks later, I dug out my spare car key and went down into the underground parking lot to drive to the locksmith to get my keys. But wouldn't you know it, my car wouldn't start. It turned over and caught, but quickly died. I tried to start it a few times but it was the same each time. I have no knowledge of car mechanics, but I knew that my car was an Audi, not under warranty, and could not be towed. I was envisioning having to go through some elaborate, expensive process to get it out of the underground parking area and to the dealer to be fixed, when I remembered BCAA. I had been a BCAA Member since 1972 - my dad bought my Membership for me - but I had let it expire when a "24-hour emergency protection plan" was part of my new car purchase package. It had been over two years since I had been a BCAA Member but I still had my old card in my wallet.

The woman who answered my call advised me that my new BCAA Membership would cost me more money than usual because I was motivated by an emergency situation instead of good planning. I totally understood. When I told her my sad story, she did me two favours: (1) she felt sorry for me and let me keep my original 1972 BCAA Membership seniority, and (2) she dispatched Bernie to the call.

When Bernie arrived, I was pleased to see he was a friendly BCAA veteran who was happy in his job. As we walked to my car I explained the problem. "Let me try," he said, and he took my key, got in my car, and tried to start it. Each time he turned the key, the engine did the same thing: it turned over, caught, but quickly died. He sat for a minute thinking, and then I could see his face light up. "I know what it is," he said. "This is a spare key, isn't it?" I had not told him my story of my lost keys so I was surprised when he said that. He went on to explain that spare keys for Audis have to be programmed by the dealership before they will work, and that is the reason the car would not start.

Bernie then offered to drive me to the locksmith and get my keys. He drove me a few miles to the store and patiently waited for me outside the store. He then drove me back home. Bernie stayed with me while I tried to start my car with my regular Audi key and had a big smile when it started on the first try. I think Bernie was as happy as I was.

I thanked Bernie and watched him drive away. Like I said, that was a few years ago now, and I have never forgotten how Bernie and the BCAA call centre woman went the extra mile for me. I'm happy to have had a chance to let BCAA know that they have such good people working for them.