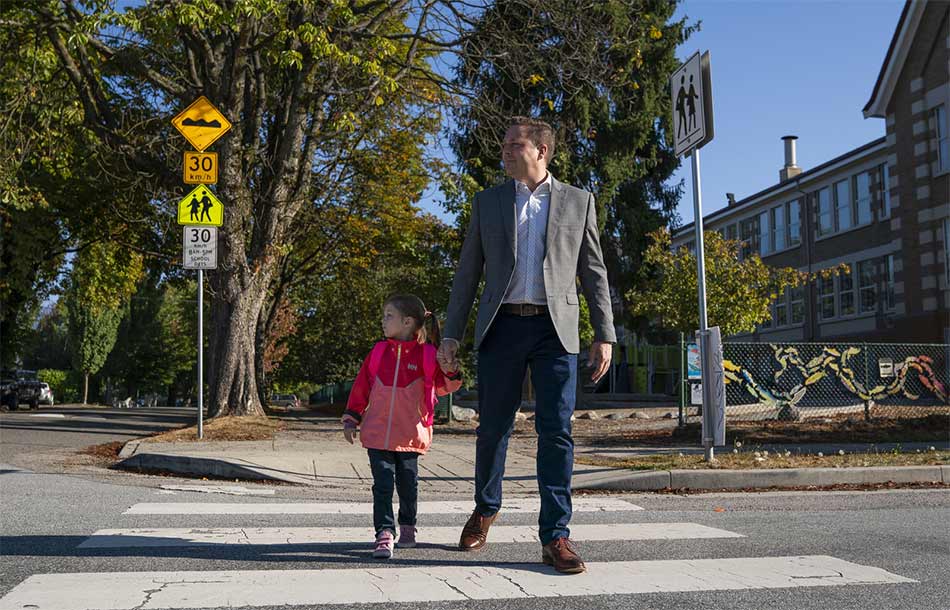 Shawn Pettipas, Director of Community Engagement at BCAA with his daughter as they cross the street in a soon to be busy school zone (CNW Group/British Columbia Automobile Association (BCAA))

Burnaby, B.C., August 28, 2018 – With back to school almost here, BCAA is imploring parents to stay calm and focused during the chaotic school zone rush hours of drop-off and pick-up.

Over the past few years BCAA’s School Zone Safety Surveys have delivered increasingly concerning results about the driving behaviours of parents witnessed in school zones.

According to last year’s BCAA School Safety Report that surveyed parents and school staff across BC, 80% had witnessed a number of dangerous driving behaviours in school zones, including not stopping at crosswalks, speeding, and using cell phones behind the wheel. Results from 2016 found that congestion, being in a hurry or running late, and distraction make safe driving during drop-off and pick-up times particularly difficult for parents.

Pettipas is worried that this year will be the same and is respectfully urging parents to do everything possible to get in the right mindset before heading out with the kids on the first day back.

“I’m a parent, so I understand that feeling of being rushed,” Pettipas says. “I know that pressure to drop off and pick up on time, but if we don’t collectively stop rushing, someone’s going to get seriously hurt.”

Dr. Ian Pike with Preventable agrees that rushing in school zones continues to be an issue that needs to be addressed. Over the past ten years, numbers of child pedestrian hospitalizations and deaths have not improved. This lack of progress is associated with being in a rush, speeding in school zones and distracted driving.

“Every year, 72 schoolchildren in BC are injured by vehicles in school or playground zones,”(1) says Dr. Ian Pike, co-executive director of Preventable. “We wish to remind drivers to be alert, focused, not on their phones, and to drive like they expect a child to run out into the road.”

For school zone safety tips for parents go to bcaa.com/schoolzone.


About BCAA
The most trusted organization in British Columbia by its Members, BCAA serves 1 in 3 B.C. households with industry-leading products including home, car and travel insurance, roadside assistance, Evo Car Share and full automotive services at BCAA’s Auto Service Centres. BCAA has a long history focused on keeping kids safe on the road and at play through community programs such as its School Safety Patrol, Community Child Car Seat Program and BCAA Play Here. Please visit bcaa.com.