Split Focus: Why Are We Still Driving Distracted?

Ask British Columbians about the biggest threat to their safety on the road, and most will say distracted drivers, without skipping a beat. Yet in BCAA’s 2021 Distracted Driving Survey, nine out of 10 respondents said they “multitask” in their cars – or ride with drivers who do. That means everything from talking on cellphones to eating, drinking, fiddling with climate controls, switching music and interacting with passengers. One in 20 respondents said they’ve been in a collision as a result, and one in five have had a close call. “We’ve been conditioned to think of multitasking as this positive, praiseworthy ability,” says Shawn Pettipas, Director of Community Engagement at BCAA. “But there are no gold stars for ‘doing it all’ behind the wheel. The reality is, our brains can only handle so much, and multitasking is just another word for distraction.”

Responses like these keep Cpl. Mike Halskov awake at night. The veteran police officer, now a spokesperson for the RCMP’s BC Highway Patrol based in Surrey, has watched distraction surpass impaired driving as a leading cause of traffic fatalities in BC over the past decade. Today, around one in four fatal crashes is caused by distraction.

After years of campaigns and giving out tickets, Halskov thinks the message is starting to break through. But there are still far too many losses.

“It’s tough to change human behaviour,” he says. “Across the province, we dedicate a lot of resources to this issue, because we understand that if left unchecked, it’s going to result in more people dying on our roads.”

Keep your mind and eyes on the road, not passengers.

What is distracted driving?

Behind the wheel, a distraction is anything that splits a driver’s focus. According to experts, sources of inattention can be visual, taking your eyes off the road; manual, taking your hands off the wheel; auditory, interfering with sound cues; or cognitive, causing your mind to wander. Framed this way, it’s easy to see why normally harmless activities – listening to music, fiddling with dials, scarfing burgers, refereeing squabbles – turn risky in the driver’s seat.

Then there are smartphones, which wrap multiple distractions and temptations into one potent package. “Our cellphones aren’t just phones anymore,” says Halskov. “They’re instruments we use to text, surf the Internet, listen to music and podcasts. It’s very difficult for people to just put them down and focus on what they need to focus on.” Meanwhile, modern vehicles are becoming technology-saturated, too, with all kinds of shiny diversions built right into the dashboards. Between touchscreens, digital displays, buttons, Bluetooth, GPS aids and infotainment systems, there’s more competition for drivers’ attention than ever before.

Your brain on distraction

When someone has been driving for years, the act feels like second nature. But to the brain, it’s still a symphony of motor-visual functions: pressing gas and brake pedals, turning the wheel, watching the road, reacting to other vehicles, gauging speed and distance. When we pile on extra workload, or distractions, the brain diverts mental resources from the task at hand.

It’s a cognitive trade-off, says neuroscientist and UBC psychology professor Dr. Todd Handy. “The brain can only engage with so much at once,” he says. “If we’re paying attention to one thing, we’re ignoring another.” And if we’re steering a big metal box down a road at high speeds, the results can be deadly.

Our minds have a natural ability to relax and wander when performing a familiar task like driving, adds Handy. Normally, they can snap to attention quickly when something unusual happens, like another car swerving. But if you’re already concentrating on something else – a podcast, a TikTok video, your reflection – you probably won’t be able to refocus quickly enough.

Studies performed in a lab setting confirm that distracted drivers miss visual cues and have slower-than-normal reaction times, much like substance-impaired drivers. “We’ve all seen distracted drivers out there, and [the vehicles] really exhibit the same sort of symptomology as an impaired driver,” says Halskov. “They might be weaving within their lane, straddling the centre line or the dividing lines. They could be speeding up, then slowing down. Or, they come to a lurching stop.” Distracted drivers are also prone to “inattentional blindness,” meaning they may look at, but not really see, what’s in front of them. This is why mental distractions are so dangerous.

It’s also why “hands-free” doesn’t translate to risk-free. Voice-only phone calls are permitted under BC’s driving laws, but there is a huge amount of evidence they’re distracting; much more so than conversations inside the vehicle. This is partly because drivers and passengers share an awareness of what’s happening on the road, naturally modulating their conversation to the situation. But a remote caller has no clue, and may keep chatting away, even if the driver gets into trouble. 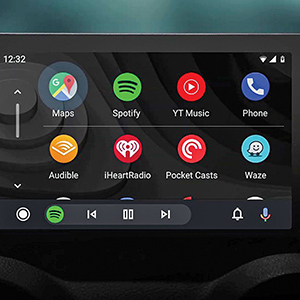 Smartphone interfaces like Android Auto are designed with features to limit distraction, but any infotainment system can pull focus from the road if the driver isn't diligent.

As BCAA’s 2021 Distracted Driving Survey proves, we’re quick to point the finger at others. As many as 93 per cent of respondents said they considered themselves a focused driver; yet 71 per cent also said they worry about other people not paying attention behind the wheel.

“We all think we’re such amazing drivers, and it’s other people who are the problem, but statistically that’s impossible,” says Pettipas. “If we all committed to paying more attention and focusing behind the wheel, it would make a huge difference on BC’s roads.”

We’re all guilty of losing focus from time to time, he adds, even if due to activities that aren’t traditionally associated with distracted driving. In BCAA’s recent survey, around 10 per cent of drivers admitted to using their cellphones behind the wheel, but an overwhelming majority said they engage in other attention-grabbing activities: eating, drinking, adjusting climate controls, changing music, talking to passengers, digging in the glovebox, checking on kids and more.

Pull over to eat, calmly – it’s better for your safety and your digestion.

When pressed, most described this as “multitasking,” not distracted driving. But behind the wheel, there is no difference, says Pettipas. “When you’re multitasking, it really means that instead of doing one thing well, you’re doing a bunch of things less well, and that can be really dangerous when you’re driving,” he says. “Clearly we all have some work to do on our own behaviour day to day.”

Start by allowing yourself extra time to get wherever you’re driving, he says. Do your eating and grooming before getting behind the wheel, and program your GPS before starting the engine. Stow your phone in a zipped pocket or locked console, or put in Do Not Disturb mode. Better yet, power it off completely, or give it to a passenger to handle communication and navigation. Pull over to deal with unruly kids.

And if you see a distracted driver out on the road, whether that person is talking on a phone, vaping or wrangling a free-roaming Labradoodle – don’t distract yourself by intervening. “The best thing you can do is focus on your own safety, and your own driving,” says Pettipas.

Smartphones and smart cars tempt distraction, but can they be part of the solution, too? Tech companies think so. The most recent version of Apple’s iPhone software, for instance, comes with a Do Not Disturb mode that automatically blocks calls and messages when driving is detected. Android phones have a similar driving mode that triggers special voice commands. Both can be configured to automatically generate “I’m driving, call you later” text replies. Third-party developers have also released a crop of anti-distraction smartphone apps. Some lock the screen during driving. Others send auto-responses from the road, or allow parents to remotely monitor teen drivers.

Set up your phone to send automatic text replies while driving.

“Assuming it can’t be overridden by the user, that kind of technology is excellent,” says Halskov.

Another promising category comes from automakers themselves: driver-monitoring systems. These use cameras and sensors to detect a driver’s head position, wheel grip and eye movements, sounding an alert to pay attention if needed. General Motors, BMW, Tesla, Subaru and others offer some version of this technology. Often it’s a complement to other automated safety systems, like lane assist, emergency braking and forward-collision alert.

New anti-distraction features will likely evolve alongside autonomous-driving technology, says Pettipas. But ultimately, there is no substitute for an attentive driver. “Technology can be a really powerful aid against distraction, but we can’t become complacent either,” he says.

For Halskov, it’s a question of priorities. After all, there is no text, call or activity worth your life, or someone else’s. “I cannot stress enough the importance of putting the phone away and ignoring it, and focusing on the act of driving,” he says. “This comes from years of going to people’s doors to say, sorry to have to tell you, but your loved one was driving while distracted and went off the road. That’s a terrible thing to have to do. And it could have been so easily prevented.”

All drivers have to make a conscious choice to focus, on every outing, adds Pettipas. “It’s an ongoing thing, and we need to be checking ourselves constantly and committing to ignore other tasks when we’re driving,” he says. “We all share responsibility for safety on BC’s roads – every day, and every time we get behind the wheel.” 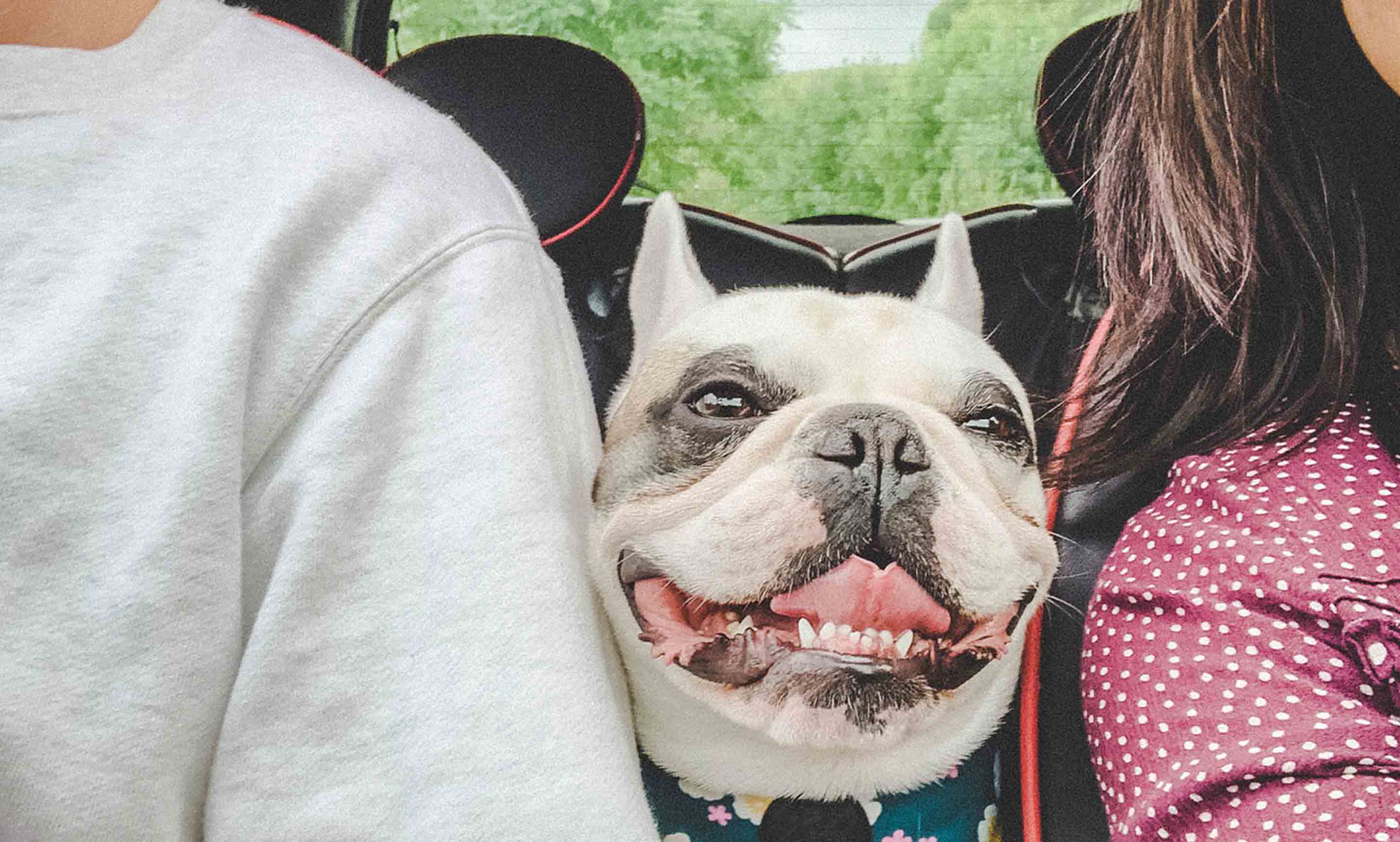 Secure pets and kids before leaving, and don’t turn around to interact – pull over.

Under BC’s Motor Vehicle Act, drivers can’t hold, operate, communicate with or watch the screen of a handheld electronic device, even when stopped at a red light. This includes emailing, texting and all other computing functions. Hands-free calls are allowed, so long as the driver answers and hangs up with a single touch, and uses one earbud maximum. But the phone has to be fixed securely, to the car or the driver’s body.

Drivers in the graduated licensing program who have their “L” or “N” sticker can’t use any electronic device while driving, even hands-free.

To deal with non-electronic distractions such as eating, grooming and loose pets, BC has a law requiring drivers to exercise “due care and attention.”

These are the tickets police can issue if you’re caught driving distracted. Fines go up from here after the first offence: