It’s Saturday morning and you’re trying to beat the opening rush at Costco, but the SUV in front of you is driving more slowly than you’d like. Do you tailgate so it will get out of your way? Or, do you shrug, admit you should have left earlier and realize you’ll get there when you get there?

Mindful drivers focus on their own behaviour, says BCAA Automotive expert Josh Smythe. “We can’t control how other people drive, but we can control how we respond to it,” he says. “You don’t actually know what’s going on with the other driver, so you need to be patient and tolerant.” This goes double during a pandemic, when levels of stress and worry are higher than normal.

Nonetheless, all too often, frustration can seem like the only option – and that can translate to dangerous driving. In a recent study by the AAA Foundation for Traffic Safety, nearly 80 per cent of drivers admitted they’d been aggressive behind the wheel at least once in the previous year. Behaviours included honking, yelling, deliberately tailgating and trying to block another car from changing lanes. In a recent BCAA/CAA traffic safety survey, more than nine out of 10 Canadians said aggressive driving is a threat to their personal safety. Are more of us turning into the Hulk on the highway than ever before?

“I don’t think it’s getting worse. I think it’s always been there,” Smythe says. “We may see it more when roads are busier. Plus we have the wonderful world of social media where people post these moments for everyone to see.”


How do you stay calm and mindful in your car? Here are a few tips:

When we’re not in our cars, there are unspoken rules about how we treat one another. If the person in front of you in a bank line were moving too slowly, for instance, you probably wouldn’t start yelling. We need to extend these courtesies to the road and see other human beings out there, says Smythe.

“If we started to treat traffic with the patience we reserve for store line-ups – especially the slow-moving ones we adapted to during the pandemic – we’d be in a better place,” he says.

What does courtesy on the road look like? It could mean slowing down to let in a driver who’s signalling to make a lane change. Or, just giving other drivers plenty of space.

“Wave, say thank you, say sorry,” Smythe says. “It takes three seconds to let somebody in.”

If you’re distracted by frustration, or reacting aggressively to other drivers, you might not notice pedestrians, cyclists, emergency vehicles or roadside workers in designated Cone Zones. You could hit or even kill somebody – a thought that should be sobering enough to calm the most agitated driver. BC’s Slow Down, Move Over law applies near roadside vehicles with flashing red, blue or yellow lights (with a potential fine of $173 and three penalty points if you don’t slow to 40 km/h in an under-80 zone and 70 km/h elsewhere).

Reduce stress, on and off the road.

If you’re eating properly, getting exercise, avoiding excessive caffeine and giving yourself plenty of time to get where you need to go, you’re less likely to explode at every perceived slight, says Alastair Moes, founder of the Vancouver-based Moose Anger Management clinic. “[Then] if somebody comes along and does something stupid on the road, it won’t have much of an impact on you,” Moes says.

In construction zones and designated Cone Zones, it's the law to slow down and obey any special signage, to keep everybody safe.

If you’re frustrated by another driver, and tempted to react with anger, take some deep breaths through your nose and abdomen. Studies have shown this type of “diaphragmatic” breathing has a calming effect, lowering the heart rate, blood pressure and levels of cortisol, the stress hormone. “You start using more of your brain and you start to see other drivers as humans who make mistakes,” says Moes.

You may not be able to avoid negative emotions completely, but you can choose whether to handle them with compassion or hostility, he adds. There are two kinds of compassion to work on: compassion for yourself and for others. “Self-compassion is: ‘Wow, that scared me, but I’m glad I’m not in danger – maybe I should slow down now,’” he says. “Compassion for the other person is: ‘Wow, they’re totally oblivious. Maybe they’re driving like that because they’re having a having a rough day, so I’ll just keep my distance.’ ”

Often we get frustrated or upset on the road because we think other drivers are breaking the rules or putting us in danger by, say, cutting us off or speeding past. “We get afraid and the fear turns into anger,” says Moes. “In that moment, the reptilian part of our brain takes over.” If another driver does something illegal or dangerous, realize there’s not much you can do other than stay safely out of their way. If you have a passenger in your car, that person could write down the licence plate number and call the police (dial 911 if what you witness could cause imminent harm; the non-emergency line if not). You can’t change another person’s behaviour, Moes adds, so focus on your own.

Instead of jumping to the conclusion that other drivers are trying to deliberately sabotage your journey, consider other possibilities.

“If someone’s speeding, maybe it’s an emergency situation. You just don’t know,” Smythe says. “So try to maintain a positive mindset and get to where you’re going safely.” 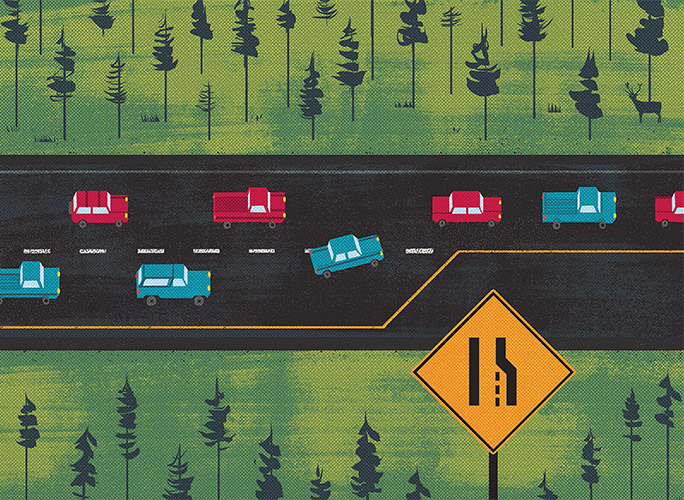 Of all the driving situations that can cause aggravation – lane changing, parking, passing – one seems to spark more than any other: merging.

Most BC drivers consider it polite to merge ahead of a lane closure. But this creates premature bottlenecks, and frustration when other drivers zoom ahead and merge late.

So what’s the best practice? Most experts agree: the zipper merge. This is when drivers proceed all the way to where one lane ends, then alternate one at a time into the open lane, like teeth on a zipper. Nobody can cheat, and everybody gets their turn. Plus, research shows zipper merging reduces congestion by as much as 40 per cent.